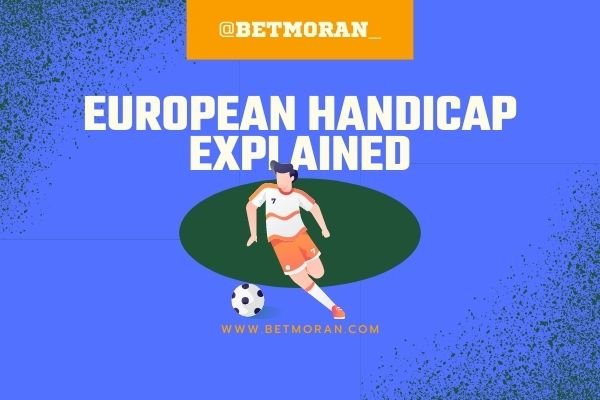 The European handicap is considered as a difficult betting option but it’s worth the risk if get it right.

Definition of the European Handicap and how it works

The European Handicap plays the role of highlighting the strength difference between teams and generally favours the underrated team making it difficult for the fan favourite to win. The European handicap is considered as a difficult betting option but it’s worth the risk if get it right.

The European Handicap is different from the Asian Handicap in that its more consistent like for example -1,-2,-3 while the Asian may vary, for example -1 the -0.5. These variations make it difficult to lose a bet and we guess that’s why it’s more popular. The draw result of the EH is usually not the actual game draw result but that of the bookie as the equalizer under a given handicap set by the bookmaker.

An example of a European Handicap (EH) let’s say there is a match between France and Croatia. Croatia being the underdog we back them by 2 goals and the match ends as 1-0 then we would have won the bet since France won by less than 2 goals which they had to overcome in the 2 goal advantage for Croatia. If France win by 2-0 the virtual result will be 2-2 and therefore a draw despite France winning the real match.

Usually the structure is made of 3-way options that is (1x/x/x2), the European adds Home (-2), Draw (-2) and the Away (-2). The above figure represents the pick backing the underdog and making it difficult for the stronger team to win.

The difference between European and the Asian Handicap

Despite one lacking the draw option there is another difference between this two handicaps that’s is if you place wager on an Asian Handicap of -2 goals and the winner wins by the exact two goals we get our money back also known as the “push” meaning we neither lose or win.

The European Handicap is different in that if you backed the underdog (-2) and the winner wins by the exact 2 goals you lose the bet. Although this is considered as a virtual draw we lose our stake since the EH doesn’t consider the draw effect. The only way to have won that bet is by betting on a draw rather than a win for the under-rated team. However such an option doesn’t exist for the Asian Handicap making the European more advantageous since its 3-way option.

When to bet on a winning European Handicap?

The handicap option changes the regular way of betting from the traditional 1 x 2 bet, if you love backing home teams to wins to win based on statistics, there are lots of available options in the market and we can choose to bet on the European Handicap odds, which is usually more risky than the Asian option but more rewarding.

The notable disadvantage of European and the Asian Handicap is that you placing your money on a team and at times a team maybe one goal up or even a draw is considered a tactic if the game is hard therefore they may not be motivated to look for more goals.

What to look out for before placing European Handicaps?

Strategies to Use on European Handicaps

Look out for better odds

The odds make the bigger difference therefore don’t focus on lower odds only but also look at big odds since this makes the bankroll difference that matters. We recommend the European Handicap on almost sure outcomes of an event since there more risk but also more profitable.

The EH is also available on other sportsbooks like tennis, basketball, hockey, American football, baseball among other events, we can use these betting options to benefit and also when big. In conclusion the European Handicap offers better odds but this comes a higher risk than the Asian handicap since we are given a limited range goals in order to win.

Betmoran is the world’s leading sports betting community. At betmoran we provide you with all tools necessary to improve the success of your sports betting career. We provide users with free and accurate betting tips & guides. Also, you can interact with pro bettors on our community pages.

home › forums › What is a European Handicap?

You must be logged in to reply to this topic.